How Second Screen Helps to Engage Your TV Audience

Why should you care about second screen?

The TV industry started emerging, penetrating and changing the lives of millions of people by the end of 1920s.

Since these times TV had its special and inseparable role to play in a number of families around the world. This picture started to change with the rise of computers in the late 1960s and then tablets and smartphones more recently. However, the story was not that doom and gloom.

According to research the consumption of TV and other media devices has reported almost similar increasing trends over the history and till nowadays. That is good news! This means that the advent of various devices did not come to replace but rather to complement the traditional TV. 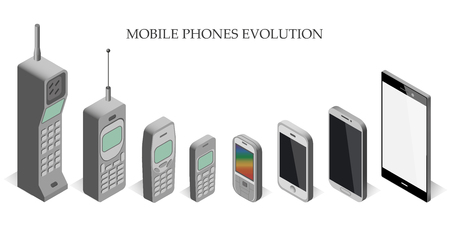 Talking about TV, do you recall that last live TV show that you were watching and vigorously betting with your friend on who would win the contest? Do you recall how fiercely you were trying to convince each other and your predictions were so accurately and cautiously determined that you wanted your voice to be heard? How about the time when you knew the answer to the “Who Wants to Be a Millionaire” show’s question way before the participant of the show made up her mind? I believe you wanted to jump right into the show and shout the correct answer. How about the time when you successfully predicted an outcome of a football game?

These all have happened to you, and in fact you spent so much effort on these while actually no one was aware of your precise predictions.

Today, the technological era has prepared something nice for you which will put you inside the live show while sitting in front of your TV at home. That magic is called “the second screen”. Through this experience you will be able to be part of the show and be seen to the public all while sitting on your couch.

Let us dive deep into the concept of second screen experience and understand what are some of its implications that gave rise to the social TV.

What is “second screen” TV experience?

Second screen refers to the usage of any mobile device with a purpose to enhance the audience, e.g. TV viewer, experience for the content. In other words, while a show or program is being broadcasted on your TV, you may use your mobile devices to engage in it, i.e. you may participate in contests, vote in polls and play games that are directly connected to what is happening on your television screen. In summary, second screen is the content mirror of TV screen that enables “participation” through mobile devices. 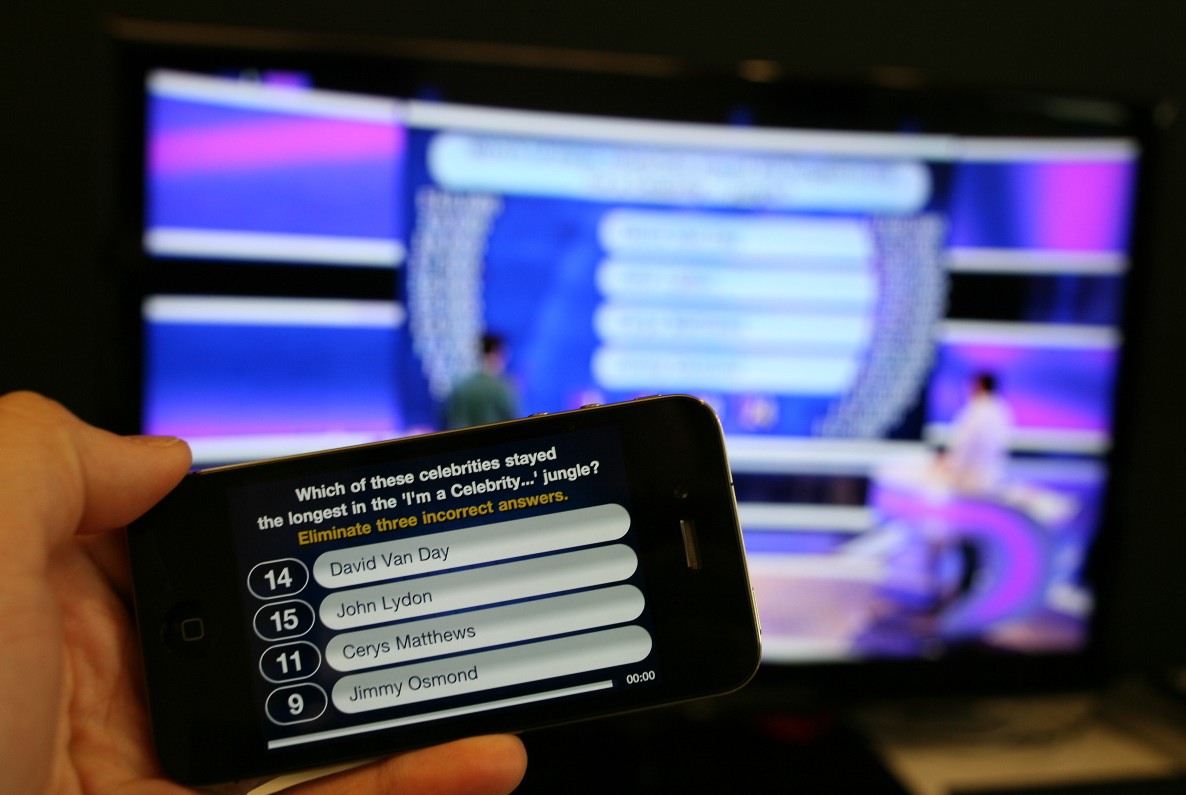 Second screen has created a bridge between traditional TV and our mobile-first world which brought into light a new term – social TV. The technology can be different from one campaign to another, but there are some common approaches that have already formed in this new engagement channel and have proven their efficiency. Those are polls, contests and games which we discuss in more detail next.

Second screen polls are a good way to engage with TV audience by asking them a question based on the context which has already been created by a particular show.

It is mutually beneficial for both sides of the screen.

Viewers prefer content which creates or highlights uncertainty and controversy around a specific topic and everyone is interested in what others think about it. On the other hand, it is important for the show organizers to gather audience sentiment and have their viewers emotionally connect to the show. 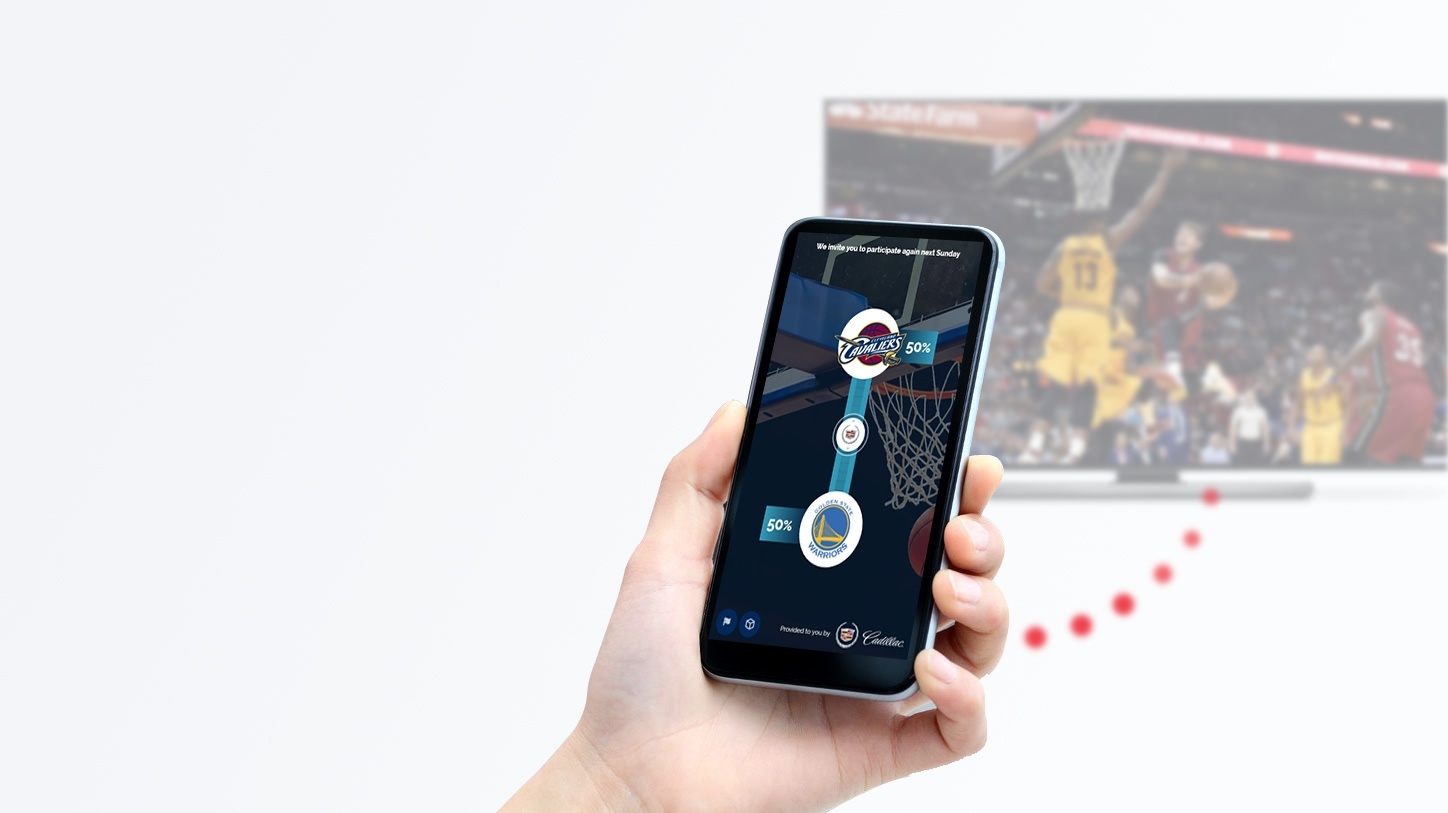 So how it really works?

For example, the viewers enter the webpage or the polling page on social media and vote for the candidate they think will win.

It is important to go cross-platform and find the viewers in different social media sites and also provide a call-to-action for text message and web voting as part of the show.

Such second screen polling methods are offered by ExciteM. The platform supports sentiment analysis and different web widgets to leverage this kind of data collection. The classic hardware sentiment dial used in small-scale closed sessions is long gone and is replaced by a software dial, which can be distributed to millions of people at the same time with ease. The results are aggregated in real-time instantly and can be shown as part of a show on TV.

Another way of using second screen to engage with the audience is organizing games. This method is not necessarily related to TV shows. It can be organized independently and distributed on social media sites. An example of a second screen game is posting an image on HTML5 widget and replacing it with a text question in exactly 3 seconds. Those participants who answer the question in less than 3 seconds get bonuses and ultimately awards.

The third way of audience engagement through second screen is competitions. The TV show organizers can create engaging competitions connected to their actual show and let players compete against each other. CTA and leaderboards are displayed on the screen, and the winners get awards, gifts and prizes. This way the viewers feel like the game on TV is not just for the actors and guests, but for anyone willing to join. The viewers become part of a community and feel connected to the show. This is the ultimate goal of any live show and is accessible with second-screen if organized properly.

What are the benefits of second screen?

Second screen provides several advantages. The main benefits are the usage of mobile devices that complement social TV experience, and easy and user-friendly procedures of implementation. Also, no hardware or software installation is required. Finally, it is well known that relevant content delivered to the right place at the right time guarantees high audience engagement.

Each of the advantages are discussed more thoroughly next:

A person looks at his or her smartphone hundreds of times daily, and that includes the times when they watch TV as well. Studies by Nielsen (2011) have identified that there is a high positive correlation between a show running on TV and the audience discussing it simultaneously on Social Media, more specifically on Facebook. Therefore, social TV enhances our mobile usage and TV watching by providing show-oriented contests, polls or games. Consequently, this increases satisfaction from watching TV shows and enables joining its fan community.

Second screen does not usually require any hardware or software installation on your device and these tools are typically entirely web-based. It is mostly done either through social media or web pages such as polling widgets by ExctieM. Using the polls is very easy and effortless and requires no advanced skills to participate.

As the questions at the beginning of this post suggest, we very often struggle with inability to raise our voice during the show simply because we are not there. Moreover, people surrounding us might not always support a discussion about the show, therefore, we need to belong to and be in contact with a community that shares our passion and interest about a show, a sport event or any other program. Second screen enables us to express our opinion in the community that cares about it.

The beauty of developing technologies is that they do not contradict but rather complement each other on their development path. Due to this, TV and mobile devices are not replacing each other. Instead, the TV audience can simultaneously use both of them, even more – get prizes and awards. Do not abandon your phone when going to watch your favorite TV show but get ready for more fun.